A Movie Of My Own

A Movie Of My Own

Dottie Hinson was tall, strong, confident, and never backed down from a challenge.

Dottie, played by Geena Davis, was a vocal leader and a leader on the field for the Rockford Peaches, in the 1992 baseball movie “A League of Their Own.”

Catchers have to be somebody their pitchers can trust, but when Dottie stepped up as the player-coach in Jimmy Dugan’s (Tom Hanks) absence, she taught many of us that not only can we all be vocal leaders for ourselves, but for the team as well.

Even though I’ve always been a quiet person, on the softball field I was not afraid to help teammates understand difficult plays or speak up if I noticed another player’s strengths or weaknesses. I would not have fully enjoyed my time playing softball if I had not grown into a leader. I have Dottie Hinson to thank for helping me grow as a player and teammate. When first watching “League,” I didn’t know the impact the film would have on my life, or how profound the connection to the characters would feel. The Penny Marshall-directed movie would influence every aspect of my future. As a softball player, baseball fan, and actress. There has yet to be another piece of art that touched my world so completely. 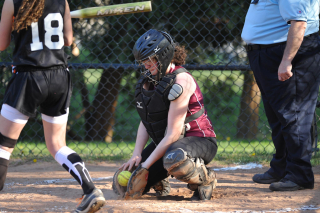 When first visiting the National Baseball Hall of Fame, there was a desire to see as much as possible. The agenda: see everything Mets related and everything from the All-American Girls Professional Baseball League. The unveiling of the AAGPBL exhibit at the end of the movie showed us that there’s a place for girls and women in the baseball community, and seeing the exhibit in person made me truly feel at home. The movie opened my eyes to a whole new class of baseball players who were a whole lot more like me, more than anybody I’ve seen play in my lifetime.

I used school projects, particularly a monologue assignment in an acting class, to research and pay tribute to the amazing female ballplayers portrayed in the movie. The assignment was to choose a “famous” person and write and perform a soliloquy based on a potential turning point in their life. I chose Bonnie Baker, catcher for the South Bend Blue Sox, and pored over all available biographies and profiles online. I invested every bit of energy into the effort, in order to do her justice.

I lugged my own catcher’s equipment into acting class, and transformed during my monologue. As my version of Bonnie Baker strapped on her shin guards and chest protector, she argued with herself about keeping her promise about leaving the game when her soldier husband came home. To this day, I still picture myself performing in the small changing area of the Rockford Peaches’ locker room shown in the movie rather than in a spacious high school auditorium. I have never lost myself in a performance quite like I did with that monologue, and even though it was only a high school assignment it is the standard I will personally hold my acting to for the rest of my life.

“A League Of Their Own” will always hold a special place in my heart. It has helped me grow into the person I am today and will continue to help me grow as I find my place both inside the baseball community, and out in the world. I love Dottie Hinson, Helen Haley, Marla Hooch, and the rest of the movie Peaches. I love Bonnie Baker and all of the real AAGPBL players. Here are a few more lessons I learned from my favorite ballplayers:

Marla Hooch (Megan Cavanagh) is one of the best hitters in the league, yet she’s almost denied the chance to even try out because she is deemed too awkward not feminine enough. Standing in the small town gym she basically apologizes for her entire existence, but once she gets on the field she proves her apology unnecessary. While other players make flashy and flirty plays, Marla makes a splash simply by hitting the ball as far as she can.

2. Your Goals Are Allowed To Change

The majority of the movie is focused on the players baseball lives. So it comes as a bit of a surprise when Dottie leaves the team almost immediately after her husband returns from service. Even after initially coming back to the Peaches, and getting them one out away from a championship, she still decides she would rather start a family than continue playing baseball. Dottie’s at the top of her game when she changes direction but she doesn’t let the voices and expectations of others dictate what she does with her life. Dottie shows us all it is ok to do change course as long as you believe in the change you are making.

Kit Keller, portrayed by Lori Petty, is so important. She is scrappy and unrelenting, and she never goes down without a fight (sometimes literally). Even when she is distraught after giving up the possible championship-losing runs, she refuses to give up in her next at-bat. And when Dottie and just about the entire world thinks she cannot hit a high fastball, she gets the biggest hit of her life off that very pitch.  So here’s to Kit and everybody else who refuses to quit – that attitude is essential in life.

Every time I see “A League Of Their Own” while flipping through TV channels I stop to watch, and I feel a sense of pride. I am so proud of the women who played in the AAGPBL, and I’m proud of the people who tell their story. I am proud to have a female-driven movie among the best baseball movies ever.

This movie is full of history and life lessons, and also just really fun baseball, and I think I need to wrap this up so I can go watch it again.