Pain and Glory: Memories of a Transgender Cardinals Fan

I’ve been a St. Louis Cardinals fan dating back to some of the earliest baseball games at Old Cardinal Stadium and saw the Louisville Redbirds take the field. The Redbirds were affiliated with the Cardinals so the allegiance to the Birds on the Bat stuck.

My first trip to Busch Stadium came on June 30, 1996. It was only the second MLB game I ever attended with the first being the Reds and Giants in July 1995 at what was then Riverfront Stadium. When you’re a Cardinals fan, you never forget your first trip to Busch. It was a hot day with the weather in the 90s so of course, my mom made us leave the game early! Tickets were $12 at the time. The Cardinals went on to defeat the Pittsburgh Pirates 10-3 that day.

While every year would see a new MLB stadium added, the next trip to Busch wouldn’t come until 2005 as the stadium would be torn down to make way for Busch Stadium III next door. It was August 4, 2005. While the Cardinals fell to the Florida Marlins that night in a 4-3 loss, there were a lot of emotions to be taken in. Jeff Suppan started the game and took the loss. It was only my second-ever game at Busch but it would also be my last game at Busch.

In the morning that followed, I would purchase my Got Rings? shirt that I would continue to wear for over the next decade. My family went to the Cardinals Hall of Fame and Museum and would take the stadium tour shortly thereafter. During the tour, we would visit the press box, the dugout, Batter’s Eye Club, Plaza of Champions, all the statues, and the Umpires’ Locker Room.

It’s kind of ironic to think about now but I didn’t get many photos with me in them. Not with the Stan Musial or Ozzie Smith statue. I had seen the Jack Buck statue but wasn’t able to snap a pic in time. I took one of the Augustus Busch Jr. statue with my brother. There was the one with my brother and I in front of the home run scoreboard that tracked the 1998 race between Mark McGwire and Sammy Sosa.

One of the photos that I had taken with myself included was in the Cardinals dugout with my father. This was going to be my last time ever in the stadium that once played home to Red Schoendienst, Bob Gibson, Lou Brock, Ken Boyer, Ozzie Smith, Albert Pujols, Jim Edmonds, Scott Rolen, Stan Musial (he worked as a GM and special assistant), Whitey Herzog, Joe Torre, Tony LaRussa, and broadcaster Jack Buck. I was not leaving without a photo in that dugout!

Cut to August 2, 2006. It’s the first trip to Busch Stadium III during what would turn out to be a magical year by finishing with the club’s 10th World Series championship. The Cards were crushed 16-8 by the Philadelphia Phillies. It was unfortunate in the loss. I was able to see the Cards play twice in person that season. We lost both times. Oh, well. You can’t win them all.

I had the day off during finals week that May so I treated myself to a Cardinals game against the Reds. Because it had rained earlier, they weren’t doing batting practice but the entire Cardinals bullpen was signing autographs that day in addition to a few position players. On the autograph front, it was one of my best days ever: Adam Wainwright, Jason Isringhausen, Braden Looper, Randy Flores, Brad Thompson, Josh Hancock, and Aaron Miles.

Because my brother attended St. Louis University, I took advantage of a family weekend trip in late September 2007. I would finally get my photo with the Jack Buck statue while taking photos of all the other statues.

In spite of all this, I don’t look at these photos any more. Not since late 2015 when I came out as a transgender woman to myself and my immediate family. I would later come out to everyone in my life over Memorial Day weekend in 2016 before going full-time that September.

Our next trip came in August 2012. This was the first family trip to a ball game that would include my brother’s wife and daughter. I was able to meet two sportswriters that I admire before the game: Derrick Goold and Rick Hummel. I would also meet Mike Shannon later that evening when he was doing his radio show at his restaurant.

Even though these trips did happen and the memories last forever, it’s hard looking at photos and seeing a body that you know is wrong. Even while working on this article and looking back at photos to make sure I got information correct, I couldn’t help but cringe. Even in the photos that I really wanted to take, it was hard to get a smile out of me while presenting as male. I’m a transgender woman. Even though I’ve been on hormone replacement therapy since May 1, 2016, not a day goes by in which I don’t pray to wake up as a cisgender woman.

When I came out to my family, my mom wanted to throw away all my baseball books because she doesn’t think I can be a sports fan, because I’m a woman. I’m sorry but that’s not the way it works. Not when I know so many women who are baseball fans and quite a few of them who cover the game in one way or another. One of my good friends used to work in ESPN PR so when I covered the Cardinals for Fansided’s Redbird Rants, I would get interview opportunities all the time when St. Louis played on Sunday Night Baseball.

While some trans women may have faked being a sports fan in order to fit into a society that says men must love sports, my love of baseball has never wavered. One of the first things I did as soon as my boobs grew to a decent size was buy a women’s St. Louis Cardinals shirt that I could be able to wear in public. Women’s clothing sizes is another story for another day but for the love of everything, is it so hard to be consistent among all brands?!?

The one thing that did change upon coming out, however, was how hard reading was initially without the right hormones in my system. Not being able to do something you love definitely hurt. By the way, if anything, my baseball book collection has grown since coming out! Some things haven’t changed. I still follow my Cardinals whenever I have the chance.

Jane Leavy is a master of moments. Whether it be the moment an improbable perfect game becomes a reality or the moment a monumental story appears, quite literally, before her main character’s eyes, Leavy perfectly conveys anxiety, happiness, fear, whatever the emotion may be. 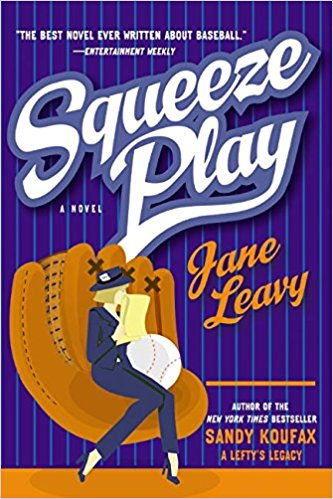 Picture this: it’s the All-Star game and your team only has one representative. He’s at the plate with the chance to give your league the victory – sure, it’s only the All-Star game, but your team is in the midst of a losing season, and you haven’t seen many of these high-stakes plate appearances. Can you feel the anxiousness, the nervous excitement? Leavy puts that exact feeling into words, transporting her reader to the stadium as, pitch-by-pitch, the game’s fate awaits. My copy is littered with page flags, each marking a different set of lines that made me feel like I was in that press box, in the clubhouse, or even in the game.

Moments aside, Squeeze Play suffers from the same fate I fear my Tigers’ upcoming season will: it drags on entirely too long. Spanning an entire summer, there are bound to be some moments that aren’t really publish-worthy, but seeing as this is written as a diary belonging to sports reporter A.B. Berkowitz, it makes sense for Leavy to include every last one – even if I think that the story as a whole suffers for it. Who am I to make that decision anyways? This isn’t a complete deterrent, though, as you can always count on Squeeze Play to return to hot stove status. It makes sense, then, that a lot of the supporting cast gets lost in the shuffle; after all, we are dealing with an entire 25-man roster and a fully-staffed newsroom.

Prominent players, like the one who has a nickname to match his oft-displayed genitalia or the one who our narrator finds herself fostering an attraction to, are some of the only ones that really feel dimensional. Others read as flat, adding to the confusion I had while reading, like the one who I can think nothing of but the fact that he microwaved a cat (yeah, that happens). Not to mention that while I can name some of A.B.’s colleagues, I couldn’t come close to telling you what they do at the paper. Still, I can see why Allen Barra (in a review for Entertainment Weekly) hailed Squeeze Play as the best baseball novel to ever be written upon its publishing in 1990.

Drawing from her own experience as a sportswriter, Leavy shapes her lead character as witty, smart and undeniably good at what she does. While absurd, these situations are ones that I trust to be rooted in reality, and there are the flashes of racism, sexism and overall machoism that we know to be true in baseball. Leavy doesn’t write a perfect clubhouse and I admire that. At once funny, poignant, exhausting, and incredibly thorough, the newly revived Washington Senators’ season is in capable hands with Leavy’s Berkowitz, delivering scoop after unmatched scoop.

Allison Place is a book-loving baseball fan who likes to combine the two on her twitter, @booksandbalks. She has a blog by the same name that is mostly defunct but may feature the occasional post when inspiration hits, which you can find at booksandbalks.blogspot.com.