Earlier this month, the Mets hosted their annual Pride Night at Citi Field… at least I think they did. You see, the Mets did just about everything they could to check “Pride Night” off their moral checklist without actually making LGBTQ+ fans feel any more or less welcome than at any other home game. The Mets botched Pride Night in just about every way, and if they want to make things right with their LGBTQ+ fans, then they need to learn from their mistakes.

The warning signs for a disappointing night were all there. The Mets have been advertising Chick-Fil-A in the ballpark all season, and gave the company their foul poles after the All-Star break. They only tweeted about Pride Night once, hours before the “event.” And they chose to bury the night beneath thousands of Hawaiian shirts, endlessly promoting that giveaway both online and on TV. They also missed out on celebrating Pride with the rest of New York, and the rest of the world, when the city hosted World Pride for the first time in June. So, when the only mention of Pride Night on the TV broadcast was accompanied by the sad sight of a rainbow corporate logo surrounded by the advertisements of a proudly homophobic company, it was actually kind of fitting. 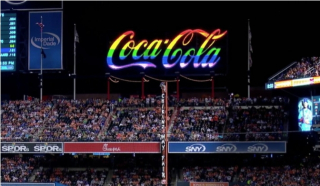 But the Mets can right these wrongs in the future and make queer fans feel truly welcome at the ballpark instead of just making us feel like we should appreciate the crumbs they throw our way.

The first, most obvious change to make is to stop taking money from Chick-Fil-A. They cannot claim to support the LGBTQ+ community while also advertising a company that doesn’t want us to exist. It really is that black and white.

Further, they need to make sure everyone in the ballpark knows that it is Pride Night. Instead of giving out a completely unrelated promo item, like this year’s Hawaiian shirt or last year’s Noah Syndergaard bobblehead, they should give out a rainbow hat, t-shirt, wristband, or pin. They need to make sure every fan walking through the gates can represent the Mets and the LGBTQ+ community at the same time, not just the fans who knew to seek out the special ticket offer hidden in the depths of their website.

It would also be great if they got even one single player involved in the promotion or the night itself. I know Sean Doolittle can only play for one team at a time and it would be stupid of me to expect every Major League Baseball player to simply accept my existence, but there should be one player on the 40-man roster willing to put on a rainbow cap and say a sentence or two when they are filming so many other promotions during Spring Training. We support these players with our time and money, and we deserve to know if they support us, too.

With added promotion and greater acknowledgement of the night throughout the ballpark, the Mets could turn it into a really positive event for the community. A portion of ticket sales could go to a LGBTQ+ charity of their choosing. They could have a representative from said charity throw out the first pitch and be interviewed on SNY during the game. They could have a queer artist sing the national anthem. They could fill the team store with rainbow Mets merchandise to match whatever rainbow giveaway item they pick out. They could play music by queer artists throughout the game, and pick people wearing rainbow merchandise for the games shown on the scoreboard. For one night out of 81 home games, they could truly celebrate a group of people who are so often made to feel other, especially in the sports world.

Unfortunately, there is nothing the Mets can do about missing the boat for World Pride. That event came and went, and they will not have the opportunity to capitalize on the entire Pride community descending upon their city again for who knows how long. The Mets are lucky to play in New York though, and even without World Pride, there will always be a strong and vocal LGBTQ+ community celebrating here in June.

It’s not SNY’s fault that the only shot they could get to show Pride Night was actually full of painful irony. The Mets are the ones who need to do better.

There are a myriad of roads the Mets can take towards a better, more inclusive and celebratory Pride Night, they just have to care enough to actually choose one.