On June 17, 1969, the world changed. That was the day of the Stonewall Uprising – when LGBTQ people at the Stonewall refused for the first time in the United States to kowtow to police there to arrest them. Their only crime was being queer. Their only crimes was being themselves. Last week, the New York Yankees honored the heroes of Stonewall by erecting a plaque in their honor in Monument Park. Manager Aaron Boone described the plaque as a necessary symbol of inclusion: 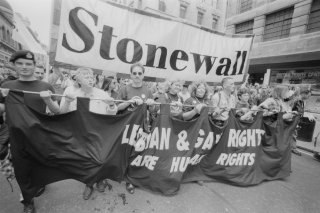 "Inclusion, ultimately. You wear this uniform, you work for this organization, it carries a lot of weight and I think it's important that as an organization we welcome everyone not only to work for this franchise, but from a fan base. We want people from all walks of life to feel like this is a place that they can come and feel comfortable, feel safe, feel good about Yankee Stadium and the Yankees as an organization," he said.

"You walk through our clubhouse and you see people from all kinds of walks of life and I feel like we're stronger because of that, and this is a night that I think honors that. As I talk with our players sometimes: 'Love somebody that's different from you.' I think that's important and the more people, the more walks of life that we can get involved with this great organization, the better."

Boone’s sentiment was laudable, certainly, but also loaded. The Yankees, who play in New York City – the heart of the queer movement in America – were the very last of the 30 Major League Baseball franchise to host a Pride Night. And the Stonewall plaque comes just weeks after the Yankees’ minor league affiliate in Staten Island announced a season-long partnership with Chick-fil-A, a restaurant chain which continues to donate millions of dollars to support the debunked and abusive practice of conversion therapy.

So it would be easy for me, as a lesbian trans woman, to write off the plaque and its accompanying ceremony as nothing more than pandering via an empty gesture. But as much as that might be true, I couldn’t do it. The plaque held great significance for me, beyond even a sign that I’d be welcome in Yankee Stadium.

Marsha P. Johnson was a Black trans woman. She threw the first brick at Stonewall, attacking the police and starting a movement. It was part of a lifetime of activism for Johnson, who became known as “the Rosa Parks of the LGBTQ movement.” Her friend Sylvia Rivera, another trans woman of color at Stonewall, also played an important role, as Elyssa Goodman relates for them.

Today, Rivera is revered as a legendary transgender activist. She vehemently fought for early legislation banning gender discrimination; sought to create safe spaces for queer homeless youth; and spoke loudly and powerfully that her community of transgender individuals, homeless and incarcerated among them, be fought for in the move toward equality. At the time, though, many gay rights activists regarded her as a mere troublemaker.

Stonewall is today largely remembered, even on the political left, as the start of the gay liberation movement, with “gay” meaning white gay men. The role of bisexual and transgender women, especially women of color, in the uprising has been largely erased. A recent piece in The Nation downplayed the role of trans women in the uprising, reinforcing the narrative that it was led by white gay men under the title “It Doesn’t Matter Who Threw the First Brick at Stonewall.”  Modern retellings of Stonewall in the media largely make a point of including the deadnames of both Johnson and Rivera, when doing so serves no real purpose besides undermining their womanhood and the significance of what they fought for.

And what is the result? This month, James Kirchik wrote for the Atlantic that the struggle for gay rights is over, with homosexuality now accepted. What Kirchik should have written was that homosexuality is acceptable for cis white men. A cis gay white man spoke at the 2016 Republican National Convention. Meanwhile, according to the Human Rights Campaign, the statistics regarding the transgender community reflect a very different picture. Just 4% of trans youth come out in their childhood, fearing repercussions from their families. Almost three-fifths of trans people (58%) report chronic, persistent harassment from police. Forty percent of trans people who are arrested are sexually abused. Half of all trans people – 47% - report being raped or sexually assaulted. A third of trans people experience homelessness. Thirty percent of trans people have been fired for being trans. More than half of all trans people who seek housing shelter are attacked or assaulted. While a cis white gay man runs for president, Black trans women are being murdered at the highest rate of any population in the country. The average life expectancy of a Black transgender woman in the United States is just 37, appalling by just about any standard. In 46 states – that’s 92% of the country – it is a valid defense to murder that your victim was trans. A movement that trans women of color started to protect all queer people has left them behind.

To be fair, the onset of rainbow capitalism hasn’t just had a negative impact on trans people. Queer people of color, bisexual women, and lesbians have also fallen well behind white men in the fight for equality. While over 2% of men in the U.S. identify as gay, half that figure identify as lesbian. Black gay men remain significantly more likely than white gay men to contract AIDS. Bisexual erasure remains a hallmark of American society, with even well-known bi figures forced to defend their sexuality in public ad nauseum.

So when the Yankees put up a plaque for Stonewall, it meant something. It meant tat Sylvia Rivera and Marsha P. Johnson deserve recognition. It meant that we could take time out of our days to say their names and tell their stories. The only other non-Yankees enshrined at Yankee Stadium are Nelson Mandela and Jackie Robinson – and yes, Sylvia Rivera and Marsha Johnson belong next to Nelson Mandela and Jackie Robinson. It means honoring two trans women of color for a lifetime of achievement that simply goes unmentioned in most history books. It means that queer children walking into Yankee Stadium will see the plaque, know they’re welcome, and ask questions.

It means that Johnson and Rivera won’t be forgotten.