This is the third installment in this series. The fourth and final part will run in July.

IT’S ALL PART OF IT

Well, as you all know I am no longer in affiliated baseball and about to embark on my first journey into independent league baseball. I signed with the St Paul Saints who play in the American Association of Professional Baseball. It wasn’t something I had planned for this year, but with everything I’ve come across in life I’ve had to find a way to make it work and figure it out. And with the mentality that “It’s all part of it” I was going to make the best of a less than ideal situation.

With being released came a lot of problems. One problem was where will I stay in the US while I find another team? Luckily the people I’m staying with were generous enough to let me stay with them for as long as I needed. It’s funny how the universe unfolds, because the person I’m living with here actually lived with my family and me in Australia for two months, about seven years ago when she worked for the Sydney Blue Sox of the ABL. So we hosted her back then, now gets to be my host here! It’s fun because her and her husband work in baseball, and are big baseball fans, so they understand the struggle of working in baseball. They have been more than accommodating to me. 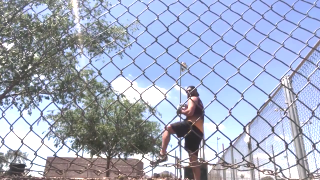 A second problem was how am I going to stay in game shape for the next month when I don’t have access to a baseball field? Luckily, I was able to find someone on Facebook who lives in Tempe who was also preparing to join a team in Canada. We met up everyday at a soccer field nearby to play catch. He would drive from Tempe, and I would ride a scooter to the field. Unfortunately he left to go join his team this week, so now I’m on the lookout for another catch partner! In the meantime, I’ll just continue to throw baseballs against a fence! Sometimes you just have to do the best with what’s in front of you. Find a reason to make it work instead of finding a reason you can’t do something!

A third problem was, how am I going to fund myself for the next five weeks? As everyone knows you don’t get paid a salary in spring training, so I was supporting myself with the money I saved in the offseason. Luckily I live at home in the offseason and my mum doesn’t make me pay rent, and she cooks for me every night, so I’m able to save nearly everything I make in the offseason playing in the Australian Baseball League. Along with funding myself for the next few weeks, how was I going to pay for the necessary things I need once I got to St Paul. When I got released by the Twins in August last year, another player moved into my apartment and used all the bedding, pillows and towels. Unfortunately when the season was done he wasn’t able to pack it all so I told him to leave it in Chattanooga for the next person to use. So those things were back on my shopping list of things I’ll need. Desperate times call for desperate measures and I thought, why not post my venmo account on twitter and see if anyone was willing to donate. It couldn’t hurt? People might make fun of me for it, but I’ve never been someone who has shied away from asking for help. In four days, people had donated a total of $583. That is enough to buy everything I need for my apartment, as well as contribute to paying rent. People have also messaged me saying that they can donate silverware and plates and other kitchen utensils. It is honestly heartwarming and humbling that so many people want to help you and support you.

My mum is a big believer in paying it forward. After all the years of her taking in baseball players at our house in the off-season, her coming to the US and taking myself and teammates out for dinner or even making dinner, and just willing to help anyway she can, I think this is the universe paying it forward to me because of her.

Which leads to the reason for this post. In times of struggle, no matter how big or small there will be people willing to help. When it’s all said and done, it’s never just you who got to where you are. Everyone who helped you along the way, they are the reason you get there. They are the ones who believe in you and support you when it gets tough, and for every single person who has gotten me to this point, I am eternally grateful.