This is the second installment of this series featuring pitcher Todd Van Steensel's life in the minor leagues.

Is the sound of my Queen inspired alarm tone going off to wake me up for a normal day of Spring Training here in Arizona. I quickly jump in the shower and try and get out of the house by 5:40am. I opted not to stay in the team hotel during camp, instead living with a friend of mine and her husband in Scottsdale. So I get to enjoy a nice 35 minute drive to the field each morning!

Is what I say to the attendant at the gate each morning as I walk into the facility. I casually make my way to the information board to see the schedule for the day and check if I’m pitching. On this particular day, I am pitching in an intersquad game at 1:00pm on Field Three at our complex. Now that I know what’s going on, I go get changed and head to the cafeteria to get some breakfast! If you don’t have to get treatment or workout, or have early work you get a lot of down time before stretch. So I usually just go back to my locker and relax until stretch time.

Is what our strength and conditioning coach yells out just before we begin our stretch. A normal day on the field will consist of stretching, throwing, some sort of team defence. Could be working on your bunt plays, some PFP’s or 1st and 3rd plays. Once we get through all that, the pitchers go condition while the hitters get ready to take batting practise. The type of running you do changes from day to day, depending on when you pitch. Since I was throwing on this day, my conditioning was only 10 sprints to 30yds. Some would call this the easy day! 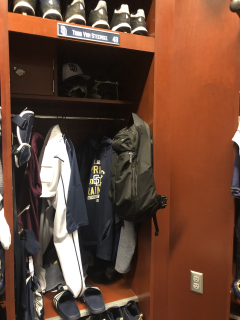 Is what I say to myself once we get back in the clubhouse after spending the morning out on the field. The food here has been really good which is a huge improvement on what we used to eat in my first few years of pro baseball. Used to get half a subway sandwich, so it’s good to see that the food has gotten exponentially better! After lunch, you have time to do whatever you want before the game.

Is the sound of the umpire getting the game underway on the back fields at the Peoria Sports Complex. Spring training baseball is unique in a way that the games “don’t count” and it’s more about players getting their work in. So, it’s not unusual to see an inning get “rolled” if a pitcher is struggling and can’t record three outs. Unfortunately for me, that has happened twice this spring training! You try not to look into it too much, because as I’ve gotten older I’ve begun to focus more on the process than the results in the early stages of spring training and that you’re just figuring things out. A few years ago I would lose sleep over an inning getting rolled but nowadays I understand that everything will come together soon and I just need to get out on the mound more often. Also, one unique thing about spring training is that we know when we will pitch. So I threw the 7th inning in this game and it went quite well! Like I said, focus more on the process, and the process is coming along just fine and the results will follow.

Is what the S&C coach tells you to do after we pitch, and we have to go workout. Now, I know anyone that knows me will laugh at the idea of me working out. I’ve never been good in the weight room, and have never really enjoyed it. But, it’s part of being an athlete so while I’m doing it, even though I’m not the strongest or the biggest guy, I’ll put in my best effort. I sometimes feel like a nuisance because I don’t know how to do certain lifts, but the S&C coaches here have been very patient with me and extremely helpful. So they definitely make it easier for me to enjoy working out when it’s not one of my most enjoyable activities! Once you’re done working out, you hit the showers, get dressed, check the schedule for tomorrow’s report time and get ready to leave.

Is what I say to the gate attendant as I get to head back to my apartment for the day. A spring training day is quite a grind that’s for sure. But you know what you sign up for, and it’s all part of it.

As Spring Training was coming to a close, Van Steensel received some news. This is a continuation of his entry after that.-Editorial Note

“Thanks for your efforts”

I knew Monday was the day that they release players in camp, because Monday is the day they give us our $25 a day meal money for the week ahead. If they release you then they don’t have to give it to you. So I was prepared for it being a tough day at the ballpark for a few guys. Little did I know I was going to be one of those guys.

I turned up to the ballpark around 6:00am, and just went about my business. Went to my locker and got changed and went to grab some breakfast. Once I was done I just went back to my locker to relax for a little while and was watching the news from back home in Australia on my iPad.

One of the coaches then walked up to me at my locker and said “Hey, can we see you for a second in the office?”. Now I’ve been around long enough to know what that means, especially in Spring Training! So I followed him into the office where a few of the minor league coordinators were in. I took a seat while they all looked at me, then I was told “We’re going to release you this morning, we just don’t have a spot for you” and my response was “Okay”. They spoke a little more, saying a whole bunch of things, I basically zoned out because at that point you really don’t want to listen to what they have to say. They asked if I had any questions and I basically said “Nope”, shook their hands and walked out.

I had a few things to take care of before I left. Had to head to the training room to do an exit physical, as well as meet with the travelling secretary to organise my travel. I did get a laugh out of it, because I was asked “Do you need a flight home? Or did you drive here?”. I wasn’t sure if that was a serious question! Because as you know, there isn’t a direct route from the US to Australia that I could drive home... yet! I told them to hold off on booking a flight home as I was planning on staying in the US a little longer to try and catch on with another team.

Once I took care of all the formalities, I packed my bag, said goodbye to a few teammates that I got close to in the last few weeks and made my way out of there. I got there so early that I had my bag packed and was leaving while a few guys were still getting to the field that morning. So I actually may have been the first one there, and the first to leave!

I began my drive home, and in the meantime my agent had been calling affiliated teams for me. I’m realistic, I understand how baseball works and know it is an extremely tough time to try and catch on with an affiliated club as they try to set their rosters for the season. But nonetheless he still was on the phone for me. While all this was happening, a few independent league teams were sending me messages asking if I’d be interested in playing with them.

I got back to my apartment, took a moment to just sit down and relax before I returned some messages I received. Last year when the Twins released me, the St. Paul Saints who play in the American Association were aggressive in trying to sign me, but it just wasn’t a good fit at the time as there were only two weeks left of the season, so I opted against it. But still held onto their details. This time when St Paul called, it seemed like the perfect fit. Everyone I’ve spoken to about playing in St Paul said it’s one of the best places to play in “Indy Ball”, so after a few days I agreed to sign with them to continue my baseball journey in the US.

Now, the hard part. I had to find a way to keep my arm in shape over the next month before I reported to spring training with the Saints on May 1st. Being in a city where I don’t know anyone this was going to be a problem. Luckily, a guy I played with the Padres wanted to help me out, and even after he spent all day at the field he said he would come play catch with me before he left for his affiliate. Once he left, it became a lot tougher! I played catch with my roommate here a couple of times, who hasn’t played competitive baseball since high school so I then went to the land of social media to send out a call to see if anyone could play catch with me. I had no luck early on, even contacted the local high schools and colleges asking if I could participate in practice but was told that it “was not permissible”. Eventually one guy got back to me, and we’ve been able to play catch and workout together for the last few days. One thing I’ve noticed about baseball players, is that they understand the struggle, and understand what it takes, so they’re always willing to help you out whenever you need it.

So as of now, I’m currently overstaying my visit with some friends in Scottsdale, playing catch with a guy I met on Facebook at a soccer field everyday, trying not to spend as little money as I can, and enjoying life as much as I can.

I’m sure people are reading this going, you’ve been released four times? Why are doing this? Get the hint, no one wants you. But, I have reasons for why I do this. I have family and friends who have supported me for the last eleven years since I signed who have believed in me and never given up on me when I wanted to. And one day, I might have children who have this crazy dream, and I wouldn’t be able to look them in the eye and tell them “follow your dreams” if I didn’t do it myself. We all have our “why”, and I know what mine are.

Stay tuned for the next installment of this four-part series next month.