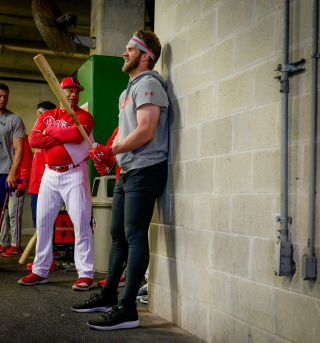 Well, here we are. Philadelphia is now in full ownership of Bryce Harper. How did this happen? What's he need to do to fit in? Can he bring Mike Trout here via helicopter by next week? Most importantly, what type of boat will he ride through the streets of Philadelphia, when the Phillies win the World Series?

Author, former Cardinals player, one-time Scranton bat boy, and, Pirates fan Jake Gronsky weighs in on a future where Mike Trout and Bryce Harper are Phillies together. Yes. Pirates fans ARE allowed to weigh in.

AHOD: We will always remember where we were and what we were doing when we heard Harper signed. How'd you hear & what were your first thoughts?

JG: I was in the most stereotypical place when the news broke: in Philly, surrounded by Philly fans shouting about how “mad good” “we” are. If only I had a cheesesteak in that jawn…

First thoughts were relief then more frustration. The free agent market this year was very alarming. Seeing dozens of mid-level MLB players sign minor league deals I don’t believe is acceptable. Baseball is one of the only sports that rewards incompetence. It is no longer a secret that teams are dredging their team for pay, taking top draft choices at a fraction of the cost of MLB talent, and rebuilding. So, why pay a mid-level player $5M to just miss playoffs, and now miss out on two possible elite players for the same price? 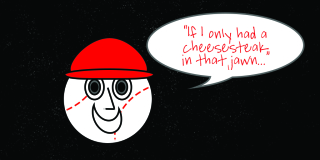 So will the MLB start to incentive winning again? Sure. After the strike.

AHOD: How Philly a Phillie do you think Harper is? Can he handle Phillies fans at their toughest?

JG: Harp is perfect for Philly. The only person more perfect for Philly fans than Bryce Harper is his father. I wouldn’t be surprised if the Birds ask his dad to throw on the pads and give us an Invincible reboot.

AHOD: What are the chances he convinces Trout to come here?

JG: A lot of changes in the market will happen before 2021, so I don’t want to be pretentious and give a prediction, but what I’ll say is that baseball needs it to happen. Baseball has been battling image issues for years. The game is romantic because it is experiential. We need kids growing up still dreaming of hitting a home run for their hometown team. We need grandkids in South Jersey sitting on the floor cross-legged and starry-eyed listening to their grandparents tell the story about a Mike Trout home run in high school. We need to be romantic about this game again. I hope Trout makes us fall in love.

AHOD: What ELSE does the team need to succeed, if anything?

JG: Time. The Phillies bit off a lot more than most organizations can chew. A computer builds their lineup, they are an early adapter to an analytics approach to development (Note: not saying that’s wrong, but being an early adapter of anything has its challenges. Think of being the first person to get a knee replacement. Kudos.), and a historic contract that could change a franchise or be the Ryan Howard Contract 2.0. Plus, they have a boat-load of young talent. Let them set sail!

AHOD: Any sort of prediction about how Phillies fans are going to react those first few games of the season when he comes to the plate?

KS: They will absolutely fawn over him the way we haven’t fawned all over anybody since Cliff Lee. He’s one of the best players on the planet and he chose to come to Philly and make it his home. How could you not?

AHOD: Obviously, the money and length of the contract is insane. Does he have to immediately live up to extremely high expectations? Do you think fans will give him room to be a normal player?

KS: He will never be a normal player, and if he totally sh**s the bed, is lazy and defensive about any struggles, and never wins, yeah, sure, he will hear it. But Philly fans have a unique way of sensing those sort of things, and so far, Harper seems like a guy who will do just fine here. I’m not even sure he’ll need to win it all to be remembered fondly.

AHOD: If you had two minutes to give him advice about playing in Philly, what would you say? 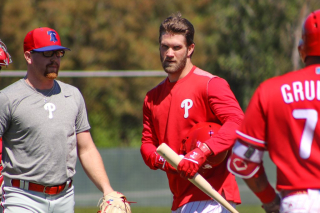 KS: Advice Just be yourself

AHOD: When he said, "Ride a boat down Broad Street?" Do you think he knew what Broad Street is? And what kind of boat will Phillies fans request he rides down Broad when the Phillies win the WS?

KS: HaHa. I’m sure he knows Broad. Perhaps even Crossing Broad! I think he meant Duck Boat— that’s a Boston thing, but I’m sure we can make it work.

Want Shtick? You got it.

AHOD: What does he have to do to endear himself to Phillies fans?

ZWR: He already did the most endearing thing ever- he signed with the Phillies!!!!!! But I guess if you're talking about baseball, and the typical lunatic Philadelphia fan, he'll endear himself to us by trying very hard and or being really good at baseball. 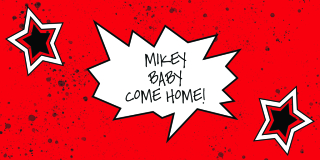 AHOD: What's the most Philly thing he's done in his short time as a Phillie?

ZWR: Well, his outright tampering whenever talking about Mike Trout is outrageous and patently absurd, which is about as "Philadelphia" as you can get. Also, MIKEY BABY COME HOME

AHOD: Have you bought the jersey?

ZWR: Dude no joke both of my scumbag kids already asked for Harper jerseys I'm getting theirs first I'm not made of money Jessica

BB: Simple answer, yes. I feel that he’s someone to watch, not just with his obvious skill but with his leadership ability. I saw that when he took batting practice with the minor leaguers today. He stopped and talked with each young pitcher after they were done to help them improve. He also stopped one pitcher in the middle of an at bat to help. He seemed quiet and the pitchers listened to him. He is a leader. That’s the kind of player I want to see. For the first time in a while, I think we have a contender, if not a winner. That makes me want to watch every play of every game this season.

AHOD: How much more exciting are the Phillies now with him?

BB: I’m thinking he’s the catalyst that they need. Last season there was just something missing. Last season our pitching kept us in a lot of close games but we didn’t have that one guy that can make the big hit when needed that gets everyone going. I think Harper can be that guy. We have solid pitching, now we have hitting.

AHOD: Do you consider it "his" team? The teamst leader, even though they haven't played a game?

BB: Frankly, yes. He’s going to be here for the next 13 seasons, he has to have more invested in this team than anyone else because he’ll be here longer than any other player currently on the roster. With the way he helped with the minor league pitchers today, he seems to be stepping into that role. If I had any doubts about him before, I don’t have any after seeing him today. When I said to him that were were glad that he was coming to Philly he simply replied, “Same.” I’d like to think that he feels the same way about us as we do about him.

AHOD: Did you get the jersey?

BB: I TRIED to…they were all sold out in my size at the Diamond Outfitters at the ballpark. I did get a t-shirt and the jersey will be ordered online, if they don’t get more sizes in soon. 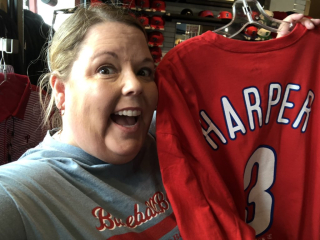