With additional reporting by RoseAnn Sapia 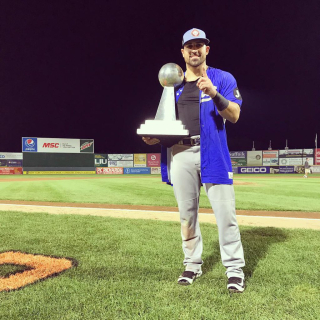 In 2018, INF/OF Anthony Giansanti confidently finished the season hitting .295/.357/.456, with 58 runs batted in, and hoped an affiliated team noticed. In the Atlantic League, where you're hoping to get somewhere else, somewhere better soon, players are working to earn those chances, even a look, that might lead to a chance.

Giansanti's team, the Sugarland Skeeters are popular with locals; they ranked 3rd in attendance overall in 2018 with 328, 491.

Good team, good league, but Giansanti thought his own 2018 finish would perhaps lead to a bigger opportunity.

"I will be honest, I was pretty bummed I didn’t get signed after the season I had last year," he said last week. "Instead of feeling sorry for myself, I decided to get back to work and strap it on for another year in Indy ball."

Once he came to terms with the news, he moved forward. He knew he had a job and he was going to continue to make the most of the (key word) opportunity. Major league scouts now routinely scour the indy leagues looking for untapped talent or guys that were released, as Gisananti was in 2016 by the Chicago Cubs who signed him as a non drafted free agent in 2010, and that's been the glimmer of light for guys playing on the outskirts, completely out of affiliated baseball. But it was another year, and he knew where he was headed. Back to play it out, play it hard, maybe get that look.

In early March, the MLBPAA announced that they were partnering with the Atlantic League to experiment with rules that MLB is considering implementing in the future. Among the rules they're trying out, are no mound visits by players or coaches other than for pitching changes or medical issues, increasing the size of 1st, 2nd and 3rd base from 15 inches square to 18 inches square, and home plate umpire assisted in calling balls and strikes by a TrackMan radar tracking system.

"I get this news which might not seem like it is a “break” for us Indy ballers," he said. "One of our few and far between breaks."

The "break" was an intriguing announcement, inspiring debate on Twitter. Ok, so the AL will be a guinea pig. That's undeniable. The league will act as a testing ground, with teams serving a purpose to Major League Baseball. Maybe that sounds crass, and it certainly will impact players. But Giansanti is adding that factor to an already devotedly disciplined routine, one that he's not giving up on after spending five years in the minors before signing with Sugarland.

He spends many hours in the gym, and in the batting cage; he's on the phone and writing emails to scouts, friends, keeping his ears open for a shot at something more. To his better senses, this experiment serves him as well.

"At this point what’s the difference? Anything to get out. It’s like being in prison and you’re given an escape root but you have to flee to west instead of east," he said, then laughed.

He's not necessarily excited about the actual rules. No, his response isn't about cherry picking what to like about his current situation. His strong reaction is about being focused on how he can make this all work for him.

" I’m talking about it from the point of view of my situation and my fellow Indy ballers who are upset about it," he said. "And people who have no idea what it’s like to be on the outside looking in while [playing here.]"

Perspective, he says, is tainted; they can "fight the man," but, ultimately, "the man" is actually getting is getting players exposure to who they need to be exposed to. That's the point. That's what they're playing for. And so, he looks forward. East, if you will.

To quote a folk hero from the Old West, Wild Bill Hickok said:

"It's a free for all, and I heard it said, Stakes are high and so am I, It's in the air tonight."