Salvation from Fighting through Fighting: An Interview with Dr Linda Dahl, author of Tooth and Nail: The Making of a Female Fight Doctor 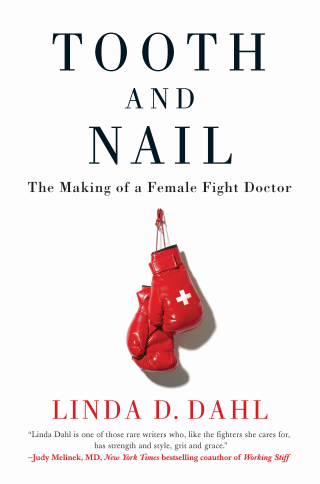 Dr Linda Dahl didn’t set out to become a fight doctor when she decided to study medicine. But the ENT, and author of the new book Tooth & Nail: The Making of a Female Fight Doctor, needed an outlet to revive her from her stultifying day job poking into the ears of wealthy patients on the Upper East Side. After a patient’s prodding invites her to admit that she wants to be fight doctor, she sent in her application, and much to her surprise, a few months later she received a phone call from the Athletic Commission, booking her for her first fight.

Thus began her three-and-a-half years as one of boxing’s few female fight doctors, a journey she details—complete with sexism, empowerment, behind-the-scenes action, and a date with Mike Tyson—throughout the pages of Tooth and Nail. I spoke to Dahl via phone one evening in early September, and she opened up about her thoughts on masculinity and femininity, the role violence has played in her life, and the biggest difference between two very male-dominated worlds: boxing and medicine.

The world of boxing is a male-driven, male-centered world—with a fair bit of misogyny at play—but for Dahl, especially in terms of her claiming her sexuality, the world of boxing is ultimately liberating. She attributes this to chivalry. Whereas her experience in the world of medicine—in residency, private practice, hospitals—was “oppressive,” a place where “femininity is a problem... everyone is competing and they’ll use anything to keep you down... gender was the one thing they had over me,” her experience in boxing was quite different. “Boxing is very blue collar,” she tells me. Unlike in medicine, while she was ringside, she “was one of the most powerful people there.” In the book, she elucidates: “Being a female fight doctor meant I was both revered and protected. I got all the benefits of the so-called weaker sex without any of the oppression.”

That power she experiences shows up in unexpected ways. Despite a rocky start, and a fair share of confusion, stumbles, and a bit of sexual harassment, Dahl finds her footing amid the boxing world after an ENT client—a dominatrix—shares some wise and unorthodox advice: “It’s not about sex. It’s about power. When men are attracted, you gain control over them.” So Dahl, who describes herself as “always on the defensive side of my sexuality,” takes the woman’s advice, buys herself a pair of “very high, very black boots” and watches as the men who have often treated her with caution suddenly respect her. It’s a surprising, almost comical, turning point in her story, but it rings true.

Dahl, who was born in North Dakota to parents of Syrian and Chechnyan origin, discovered boxing through her now-ex-husband while completing her surgical residency in the Bronx. While she calls it “ironic to find salvation from fighting through fighting,” boxing allowed her to understand and make sense of the violence she was continually surrounded by in the medical world. She recounts being familiar with violence during her youth, because of her father and stepfather’s temperaments, starting to weightlift at the age of 15, visiting Saudi Arabia as a teenager and being forced to wear a burka. “I was so used to being in and around violence that I was able to find myself through what I know,” she says. “It was a language I knew, and I was drawn to that language.” In the book, she describes watching her first fight as “cathartic. They were like living avatars for my own dark, internal video game.”

It might seem a bit unusual for a woman to admit to loving the “primal” aspect of boxing, but that ability to express how such a “bloodthirsty” sport can make her feel so “alive” is part of what makes Dahl’s narrative in Tooth and Nail so refreshing. Women’s roles in boxing are rather proscribed—usually women play the part of adoring fan, girlfriend, or scantily clad ring girl, so most of the fighters were surprised when Dahl showed up to take their vitals. One tells her, “You so pretty... This place too dirty for you.” One even refuses to allow her to examine him after an injury. Despite all this, Dahl thrived during her years as a fight doctor. It was ringside that Dahl truly found her inner strength. She transformed from a passive spectator to her own kind of fighter. By the end of the book, she stands up for herself when she is confronted with a boss who won’t stop hitting on her, moves on gracefully after the shuttering of the practice she works for, and doesn’t let her father’s refusal to lend her money to start her own ENT practice stop her.

These days, Dahl continues to work as an ENT in private practice in New York City. Her patients are mainly adult and Broadway singers, and infants who have trouble breastfeeding. This latter group often come accompanied by their dads, she tells me, and now that Tooth and Nail is out, they love to ask Dahl about her past life in the ring. Boxing acts as a bridge throughout the book, allowing Dahl an escape from the loneliness she finds in medicine, and even now boxing continues to connect Dahl to her patients. And I’m curious, given her involvement with the theater world, if she sees parallels between theater and boxing: “Boxing is so much like theater,” she says. “They’re all performers.”

Since hanging up her stethoscope, at least in the world of boxing, does she miss anything about being ringside? Dahl answers without hesitation: “Jumping into the ring when a fighter was hurt.” She goes on to tell me that last year, after almost a decade away from the ring, she was invited back, not as a doctor, but to sew up fighters. It surprised her, she says, how much she had missed the “the sweaty, growly, manly thing—I had been annoyed by it, but I missed it.” She found herself missing the community as well. “When I went back, people still remembered me. There were kind, loving, and accepting.” But she never watches boxing on television, she tells me, “because once you see a live fight, you never want to see it televised.”

Tooth and Nail: The Making of a Female Fight Doctor