A Little Bit of Pop 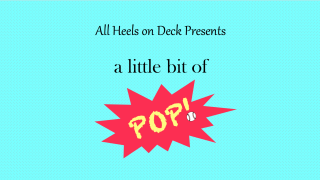 An ode to the perfect pitch of baseball and musical theatere merging.

This is the debut of a regular feature focusing on pop culture and baseball. 'A Little Bit of Pop' will run several times a year, with a mix of writers contributing. In this first installment, Helen Silfin, an avid fan and attendee of musical theatere and baseball games, focuses her eye on baseball references and appearances of America's pastime in another of America's beloved traditions--going to a Broadway (or local) show.

At first glance it seems like musical theatre and baseball would go together about as well as ice cream and hot sauce. However, upon further review you realize baseball references in musical theatre are more like M&M’s in trail mix - sweet, surprising, and there are truly never enough.

Shows like Falsettos, Ragtime, and You’re A Good Man, Charlie Brown all have individual scenes revolving around baseball. The baseball references are fun, do not get me wrong, but once the scenes pass you know you are about to step into a world without baseball once again and therefore they really are not the best intersections of baseball and musical theatre.

My favorite baseball references come when I am least expecting them, without warning from the song title, setting, or plot. Newsies and Wonderful Town reference baseball just enough for me to geek out without actually making it a part of the show at all. I find these moments so satisfying because I feel like I am appreciating little Easter Eggs in the shows, only noticed by super-attentive audience members.

So in truly fitting fashion, when I finally got a prop newspaper from Newsies I ended up with the sports section of the paper, which was full of baseball box scores. The paper - dated July 20, 1899 - is incredibly detailed. There are brief descriptions of each game, lineups, and line scores. 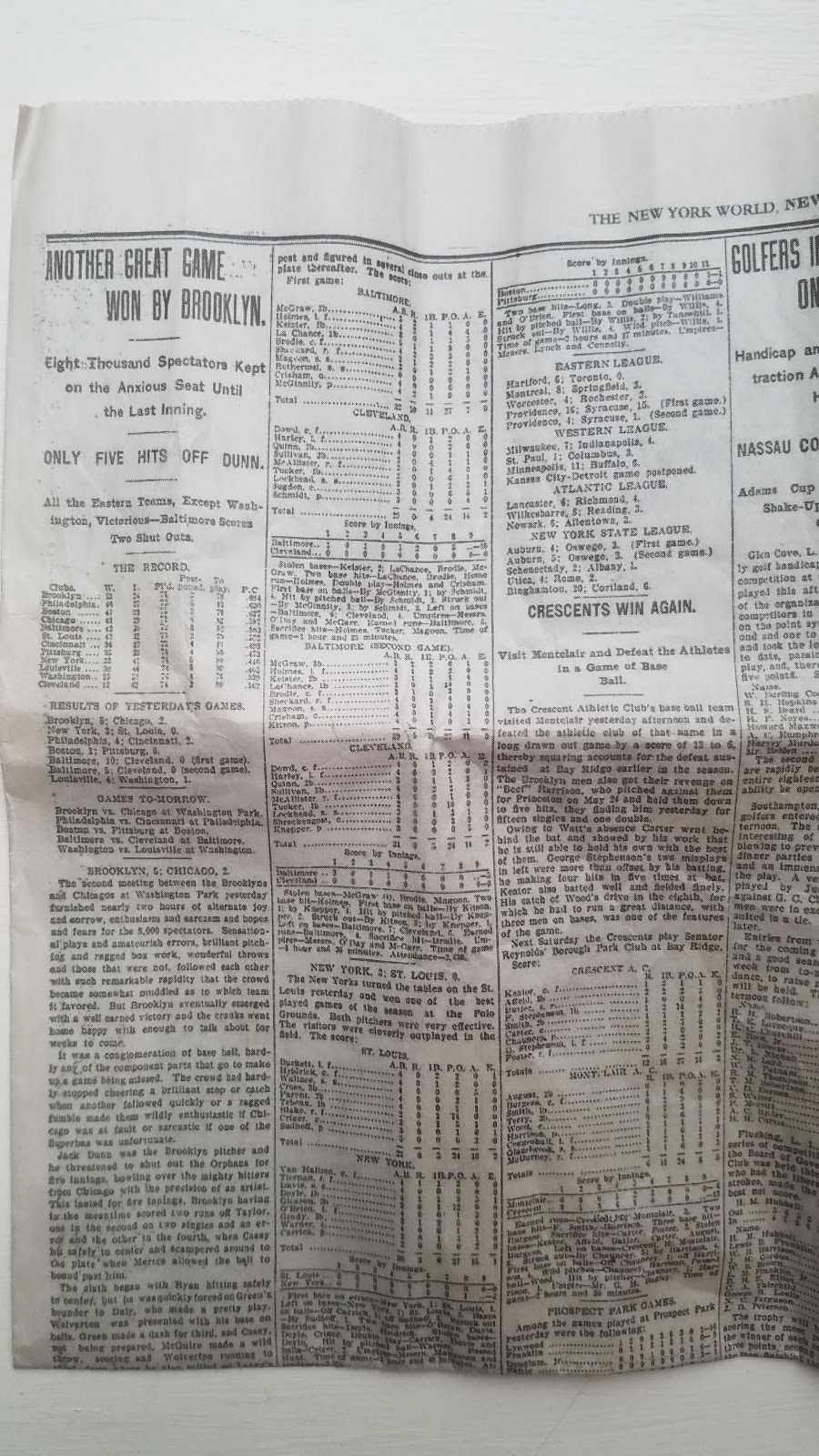 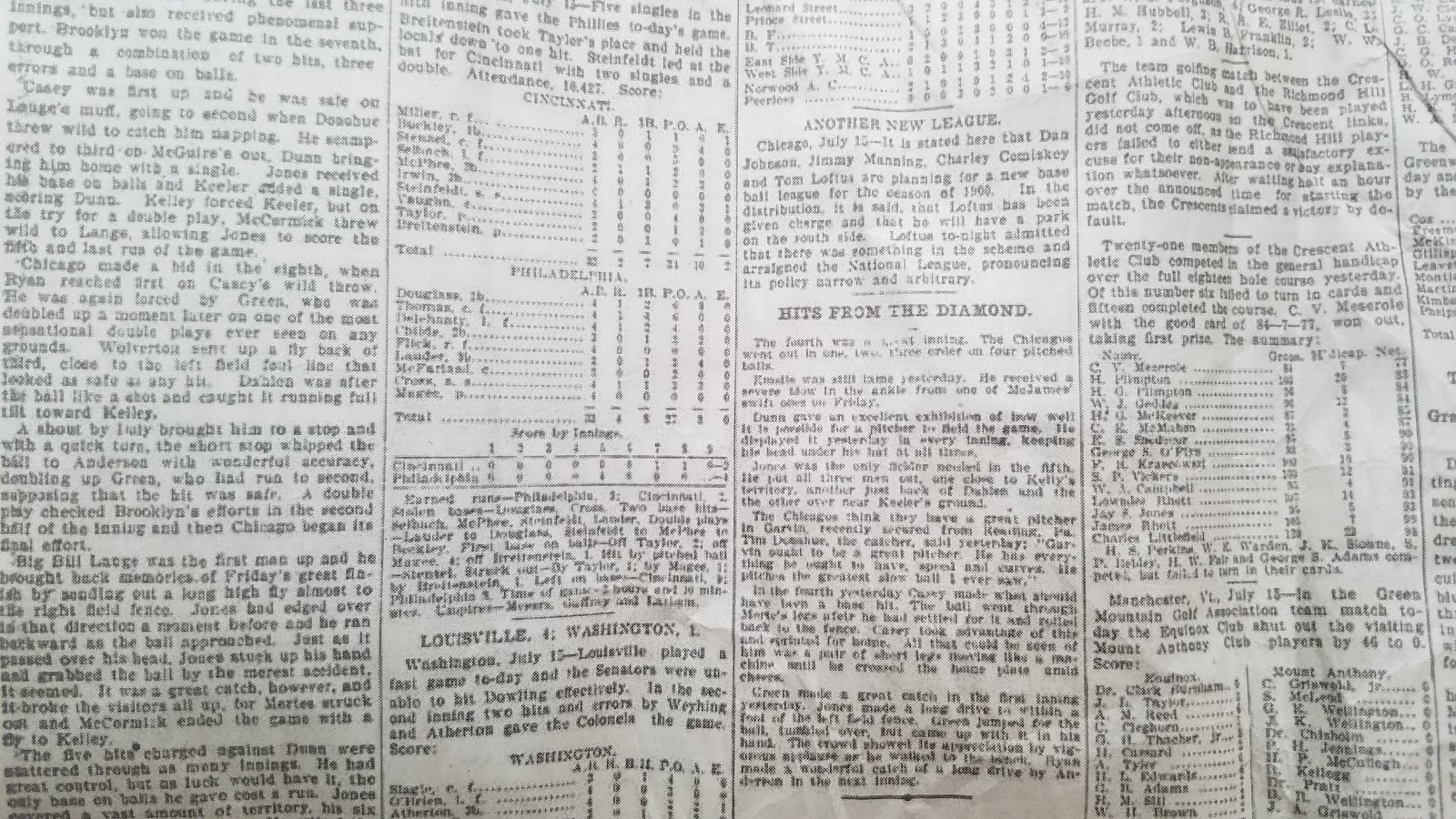 Unfortunately, none of the scores are real. The big story in the paper describes a Brooklyn victory over Chicago, while a search for the real July 19, 1899 scoreboard tells us the Brooklyn Superbas played the Pittsburgh Pirates and the Chicago Orphans played the New York Giants. Despite the fact that the scores are not real, I still marvel at the attention to detail in this little Broadway prop. It would have been easy to make a few pages of generic news with headlines and pictures just big enough for the audience to kind of see. So I do give major props to the props department for creating names and scores and even game stories.

The baseball surprise in Wonderful Town comes during the song “One Hundred Easy Ways To Lose A Man.” The second verse goes as follows:

He takes you to a baseball game

You sit knee to knee

He says, "The next guy up at bat will bunt, you'll see"

Don't say, "Ooh, what's a bunt? This game's too hard for little old me"

Just say, "Bunt? What are you nuts? With no outs, two men on base

And a left-handed batter coming up, he'll walk right into a triple play

That's a sure way to lose a man

Both of these references are fun because they are completely unexpected and unprompted. They both made me immediately want to find out if they were real - if the people who included them were as big a baseball nerd as I. They also reminded me that having two seemingly completely different interests only means twice the fun when those interests intersect.