Home Archives Profile Subscribe
Pain and Glory: Memories of a Transgender Cardinals Fan
A Movie Of My Own

'Lifer:' Need Ideas to Get Through a Terrible Baseball Game? 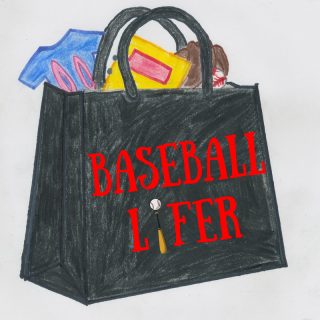 Welcome to a brand-new to of Lifer! Our team has spent the last couple of weeks choosing items and topics to include that would resonate most with you, our readers. Lifer is all about our shared love of baseball. We’re all passionate about some aspect of the game, and have different ways to express that passion. For our Lifer team, part of the baseball fan lifestyle includes sharing stories and recommendations, and connecting with all of you.

This edition of Lifer is particularly special. All of our writers have a personal connection to the items we’ll be featuring. You’ll get to learn more about our baseball fan lifestyles, while reading about a variety of apparel, promotions, and giveaways. This edition also features a very humorous piece by a guest writer that every baseball fan will definitely relate to.

So, join us as we do life the baseball fan way! There’s sure to be something featured in Lifer for everyone.

This Red Sox t-shirt from American Eagle’s Tailgate line is the perfect combination of throwback and modern, classic and unique. It is a cute alternative to a regular player t-shirt without being uncomfortably tight or overwhelmingly frilly. It has such potential to be an everyday wardrobe staple because it is so clean and simple. Having regular retail sizing on women’s sports apparel may be what most excites me about this shirt (and entire clothing line). For years I would see a cute top in the women’s section of a team store only to find out size “large” was closer to a children’s small than anything else. I have shopped at American Eagle for the better part of the last decade and know exactly what size I wear from them. The shirt comes in XS-XXL.

Brought to you by American Eagle’s Tailgate line – this adorable vintage New York Mets sweatshirt is everything I have ever wanted. Every American Eagle sweatshirt I have owned has been super soft and cozy enough to sleep in for days on end. Baseball is not always played in sunny summer weather and it can be hard to stay warm without hiding my Mets shirt under my jacket. This is just what I need to be comfortable at games and get me away from the chunky, shapeless, and unflattering ghosts of sweatshirts past. Even though watching the Mets feels like a waking nightmare at times, this sweatshirt will only bring sweet dreams of home runs and postseason baseball. The sweatshirt comes in XS-XXL.

You MadBum?
By: RoseAnn Sapia 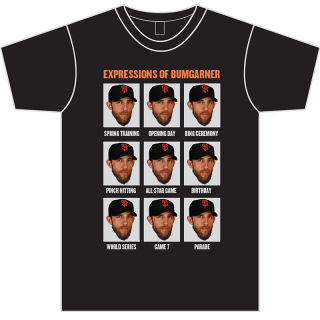 Sometimes the best gameday giveaways are the ones that only the home team fans would truly treasure. The San Francisco Giants are giving away an “Expressions of Madison Bumgarner” T-Shirt to the first 20,000 fans on Saturday, June 23rd when the Giants take on the San Diego Padres. I could not have laughed harder when I saw this shirt!

I first found out about this giveaway on an ad behind home plate.  It read, “Expressions of Madison Bumgarner T-Shirt Giveaway”. I had no idea what to expect, but was immediately intrigued. What are the “Expressions of MadBum”? There’s Joe West stare down Bum, and Yasiel Puig at-bat Bum. So many different ideas ran through my head of what this shirt could possibly showcase.

Well, this shirt was not what I expected! This unique giveaway features nine possible Bumgarner scenarios. The twist? Each scenario has the same stoic MadBum expression pictured above it. The humor of it is in its truth and simplicity. Bumgarner truly does have that same expression a majority of the time, aside from a few tenser exchanges he occasionally finds himself in.

This is a giveaway Giants fans don’t want to miss! More information about San Francisco Giants promotions can be found here.

10 Ways To Distract Yourself During a Terrible, Terrible Game

As certain as humidity, frizzy hair, and sweat, summer’s arrival guarantees some intensely embarrassing, boring, and/or awful baseball games. But you don’t have to change the channel just because your team’s backup catcher is pitching an inning. Here are some games you can play with yourself to enjoy the game:

1) Count everyone in the stands who’s on their phone. Two points for bored selfie takers, five points if it’s Keith Hernandez on Twitter, ten points if it’s A-Rod during Sunday Night Baseball. If your point total is higher than the number of runs your team’s relievers give up, you win.

2) Match the players on your team to new, themed walk up songs. Maybe every player needs a One Direction bop (Brandon Nimmo would have “Steal My Girl” and Yoenis Cespedes would use “No Control”). Maybe they each need a Disney song (Aaron Judge is “Let It Go” and Giancarlo Stanton is “Hakuna Matata”). Or match them to tracks on Carly Rae Jepsen’s masterpiece, Emotion (Mike Trout gets “Run Away With Me,” and Shohei Ohtani is “Making The Most Of The Night”). Put some Carly on and dance to “Your Type” as your team strands two runners in scoring position.

3) Decide which players most need a makeover from the Fab Five. Imagine Jonathan Van Ness flirting with Charlie Blackmon as he trims his monstrous beard. Imagine Antoni teaching Jacob DeGrom how to make a sandwich so he’ll eat less McDonald’s. Imagine Karamo crying with Joey Votto, two handsome bald men coming together to dismantle toxic masculinity one heart to heart at a time. Imagine them crying with you as you watch your favorite player break his nose when a ball hits him in the face.

4) Figure out which players’ names fit into “Alexander Hamilton, my name is Alexander Hamilton,” then rewrite the song for them. “Michael Conforto. My name is Michael Conforto. There are a million rings I have to win, so just you wait, just you wait. When he was ten he went and played in the Little League World Series, his mother said, ‘Michael one day you’ll play in the real World Series’....” Stop when you realize rhyming is hard. Hum the tune to yourself as your team’s center fielder misjudges a fly ball and allows two runs to score.

5) Sort the players into their Hogwarts Houses. This only works as a distraction if you’re not a Yankees fan, since every person in the Yankees organization is a Slytherin, except Didi Gregorius, a Hufflepuff. Think about how your team’s catcher wouldn’t be charged any passed balls if he could use a simple “Accio Baseball.”

6) Picture what this game would look like if it were directed by a famous movie director. Greta Gerwig could capture the lazy California splendor of Petco Park, heartbreaking but soul-quenching at the same time. JJ Abrams would use so much lens flare on those night games. Nancy Myers would find the prettiest cocktail in the stadium and catch the reflection of a home run – not your team’s – in the glass.

7) Make up new skills contests for the day before the All-Star game. Which infielders can turn the most double plays? Which pitcher can pick-off the most runners off first base? Who wouldn’t watch the Taco Bell Steal Home Challenge? Apparently, no one on your team will be competing in any of these, but it’s nice to dream.

8) Write a letter to the commissioner. Not about anything in particular, I just figure most of Rob Manfred’s mail is mean and aggressive, so maybe he’d like to hear about your idea for a baseball-themed season of Queer Eye. Keep it light, but feel free to slide in a postscript about how your team’s losing record is because of bad ownership.

10) Try to find the umpires’ social media. When nothing comes up, find their wives’ or kids’ Instagrams. Think about the type of person who’d become an umpire. Are they masochists? Do they love getting screamed at? Do they just hate themselves?  Google Nora Ephron’s essay about Bernice Gera, the first professional female umpire, who resigned after a single game. Think about the patriarchy, the resiliency of women, the humanity of women, and the imperfections that define us all.

Look up at the score — it’s still just the fifth inning.