Meandering through the bustling streets of Washington DC, en route to a baseball game, there’s many differences in the people but also a common thread. Across different ethnicities and languages, Washington Nationals #34 connects the people of DC.

Everywhere you turn there’s a Bryce Harper graphic tee or signed jersey. From kids who’ve been dragged to a game by their fanatic parents, to the 10-year season ticket holder, Harper resonates. Knowing that most people attend Nationals games for the young phenom and nothing more, how would a Harper departure affect fan connection of the team as a whole?

When most people think about the Nationals, the first name that comes to mind is Bryce Harper. These are the results of a twitter poll I conducted: 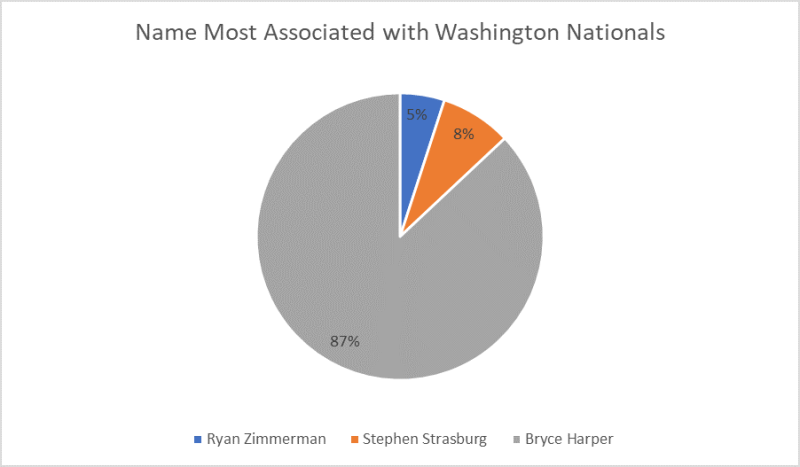 The feisty slugger has surpassed Stephen Strasburg and Ryan Zimmerman as the face of baseball in DC. Besides being a premier player and a rare athletic specimen, people in DC need a player to cling to. That’s clearly Bryce Harper.

Prosperity lacks in DC sports. There are expectations, but realistically there's a ceiling. A great regular season with a lackluster playoff appearance is the bar. That being said, players themselves have become the focal point. For the Washington Nationals, a relatively young franchise of only recent success, the players are a huge part of how the fan base identifies.

Making his major league debut in 2012, Harper had instant impact. Not only did more hype surround the young Nationals and this energetic, hair-flinging, helmet-dropping stud of an athlete, but attendance numbers shot up.

In every season since 2011, the annual attendance hovered around 22,000. One year later, and every year after, 9,000 more fans have popped up. A 2016 study conducted to see how much fans spend at a game revealed that two people at Nationals Park spend approximately $85.90. Due to the Harper pandemonium, the team has made an additional $386,500.00 per year and $1,932,750.00 over the past 5 seasons (from the extra 9,000 people accounted for). That data is not including merchandise sales – just parking, tickets, and food/beverage – which brings in a surplus every single game. Harper’s jersey is a top seller in all of baseball. Speaking monetarily, Harper is a powerhouse for sales. (2016 study: http://fortune.com/2016/04/03/mlb-ballparks-tickets/ )

Besides contributing to team and owners’ wealth, Bryce has been meaningful to locals hungry for baseball. From his signature opening day home runs to the big post-season hits, he’s given the Nationals spark and spunk and, ultimately, their “Natitude” identity. His presence creates a shift, from the way the lineup is approached to how opposing pitchers handle him. He's a player that invokes fear in opponents. His STATS constant reminder that if you give an inch, he’ll take you out of the ballpark.

There's also that fire he plays with, and the crowd feeds off of it with every foul ball he sends crashing into the net. Record setting blasts are marked with a red chair in the 3rd deck. There's also frequent run-ins with umpires. Fans connect with him as the heartbeat of that team.

A Year of Importance

The melting pot we call the nations capital is slowly shifting into a baseball town. Though football is still the main focus - despite continuous disappointments - baseball is emerging from the shadows. Harper can be instrumental in the transition, but time could be running out.

The upcoming 2018 season is one I’d mark as the most important for this franchise. Next offseason’s free agents are creating panic throughout the industry. Murphy and Harper are a couple of big names that could be on their way out. It’s feasible to expect a Murphy return but Harper, not so much. He will be a free-agent, and discussions about that moment have been around for years. The possible asking price that’s been suggested ($300-500M) is way out of range for the Nationals. It would take a literal miracle to retain him. Many Nats fans might be ignoring that reality.

Baseball fans in DC have waited patiently for baseball success. A Harper departure would be devastating, creating a huge void. He's much more than a superstar and it would be naïve to think that if he walks, everyone will stay. The Nationals have to know a lot of empty seats would be the likely result.

It's painful to think of how different things will be without #34, but business is business. The rumors surrounding him going to the Cubs or Yankees may be true, so in preparation for his inevitable Nationals departure, this should be a year of appreciation and admiration. He’s given this city grit, heart, and soul, and we can’t take that for granted.

No one knows what will happen. But one of the biggest breakups in DC sports could be just up ahead.