The Presence of Muslims in Baseball Growing, Still A Ways to Go

That's the day the Chicago Cubs Twitter shared my tweet with me and my nephew excitedly celebrating Game 2 of the NLDS against the San Francisco Giants. You’re probably wondering why I’m touting such an inconsequential event. Baseball teams retweet fan pictures all the time, especially during the playoffs when they’re working to to get as many people excited about the game as possible. But how many times do you see a sports team, MLB or otherwise, sharing a picture of a fully veiled Muslim woman to over a million followers? Not often.

To be fair, there probably aren’t that many niqabi’s avidly watching and posting about baseball, but who’s to blame for that? And does that blame also extend to the lack of all women of color fans, Muslim or not, in the MLB? It is a recurring theme within media and public consumption today to stress the importance of representation, because it's important. Fans like to see themselves in the players. Their race or religion being mentioned gives you a sense of attachment to a player. This can be seen in basketball with Kareem Abdul Jabbar, or brothers Hamza and Hussain Abdullah within the NFL. Even currently, the Toronto Maple Leafs have Nazem Kadri, a Canadian Muslim as their center. Baseball has Sam Khalifa, who played shortstop and second base for the Pittsburgh Pirates in 1980s. Not to undermine his career at all, since making it to the majors is an incredible feat within itself, but his presence did not lead to an influx of Muslim players within the league. Why is that? Because baseball is still seen as a “white man’s” sport.

According to ESPN, the average age of baseball fans is currently at 56 years old, and I’m sure no one thinks this age distribution is swayed by Muslim women. This is not to say that it’s the game of baseball itself that’s the reason there a lack of Muslim women and women of color fans in general. But it’s been difficult to break the mold in people's minds of the quintessential baseball fan being anyone but an older white American man.

You can use cricket as a comparison. Diehard fans will argue the difference between cricket and baseball until the end of time, but when it comes down to it, both games have bases, fielding, runs, and batters, whose efforts are in order to not get out. The games are similar enough to assume that they could have a similar fan base, but cricket fans represent different countries and racial groups within a single country as well. This means the potential for baseball is definitely there, but there needs to be a few adjustments.

One, we need to get rid of this idea that to be a sports fan, you need to know the entire history of the sport. I didn’t really get into baseball until my sophomore year of undergrad and I consistently had to deal with people quizzing me about my favorite players from the years 2000-2010. This is likely more commonly done to women, and can prevent them from pursuing interest in a sport. Like bro, I didn’t care then, doesn’t mean I can’t care now And two, we need to see more coverage of the sport by Muslim women so we know that we’re not alone as fans. Do you know how excited I was to see Cubs Den announce Husnaa V’hora, a hijabi, as a new contributor? Before that the only current connection I could find with baseball and Muslim women was Aaliyah Fowler, wife of former Cub and the first player to lead off a winner-take-all World Series game with a home run, Dexter Fowler. Aaliyah Fowler isn’t even Muslim, she’s just from Iran, a majority Muslim country. That’s how far I had to stretch. Finally, add a pitch clock- Ha I’m kidding about this one, please MLB you don’t really need this, just give us cool in game entertainment like how the NBA has Bhangra Empire perform.

However, throughout this all this critique, the MLB is making strides to widen its fan base and provide more opportunities for diversity in the sport. This can be seen in the front office level, with Farhan Zaidi being the General Manager of the Dodgers, and Shiraz Rehman, assistant GM of the Cubs. The MLB also created the Diversity Fellowship program in hopes to get new and different talent to the game of baseball on an operational level, and hopefully that momentum with translate to players and fans as well. 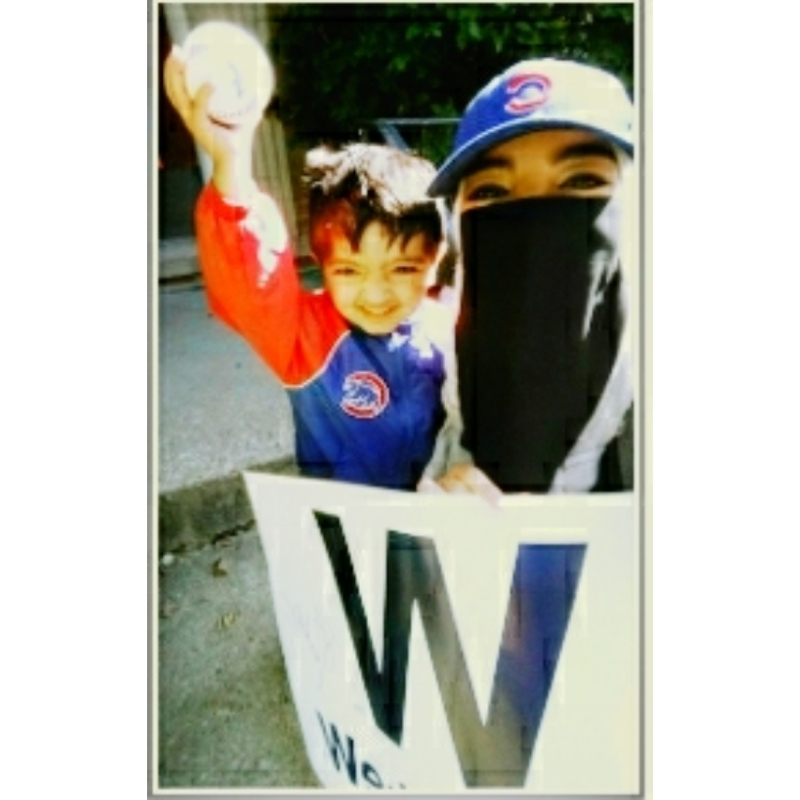 Rimsha Ganatra is a recent graduate of Northwestern University with a BA in history and English. She grew up with Cubs games playing in the background at home, but has recently renewed her passion for the game which can be seen by her incoherent tweets of games from her personal handle @rimshutup. Besides, academic papers she has never written for any publication and hopes you’ll go easy on her in the comments. 